Blue Lace Agate is found on the farm Ysterputs 254 (meaning iron holes) in Namibia. The mine is located adjacent to the “Blinkpan” (shining shallow lake) which can be seen to the west of the B1 highway about 80 km north of Vioolsdrift and Noordoewer, which are the border towns on either side of the Orange River between South African and Namibia.

We now know that blue lace is a true agate. As from May 2020, a detailed description of the mineralogy and geology of the mine is available. Please refer to the article which can be found at https://www.mineral-forum.com/message-board/viewtopic.php?p=71970#71970

September 2021. A further article has now been written on the blue chalcedony pseudomorphs found at Ysterputs. Here is the link:  https://www.mineral-forum.com/message-board/viewtopic.php?t=6531

March 2022. “Are there any other blue agate deposits in southern Namibia?”   The answer to this question can be found on the following link: https://www.mineral-forum.com/message-board/viewtopic.php?p=77934#77934

Corrections to this website will be made as on-going research progresses.

Blue lace agate is found in an area where there has been much geological upheaval and the layers of chalcedony were formed over time from multiple episodes of deposition and dissolution.

The deposit is “a hydrothermal quartz-calcite vein system related to a dolerite sill. This sill has intruded into the sedimentary rocks of the Karoo Whitehill Formation.” (Ludi von Bezing: “Namibia: Minerals & Localities”, 2007.)

At Ysterputs, the Blue Lace agate is found as two separate vein systems of varying thickness. The primary seam averages about 5 cm in width and dips steeply (70–85 degrees) to the northwest. The vein can become as thin as a centimetre or as wide as 10 cm or more. Occasionally vugs (cavities in a rock that may contain crystalline minerals) are found in the seam, which are lined with bright, drusy, blue chalcedony, or else white or lavender-coloured quartz crystals. Dogtooth and other forms of calcite crystals, and small, golden blocks of siderite have also been seen lining these vugs. Surrounding the Blue Lace agate in some places is a massive green dolomite material that polishes to a glass-like finish, as well as a soft yellowy brown clay which is a weathering product of the dolerite. Instances of gypsum growing on the chalcedony have been recorded, as well as examples of chalcedony pseudomorphs most likely after melanophlogite. 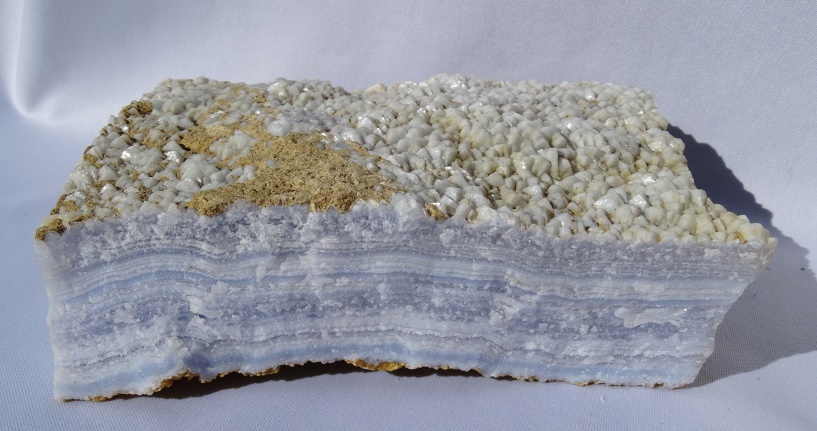 The chalcedony itself is hard and measures about 6.5–7 on Mohs’s scale of hardness. The Blue Lace appears to have been laid down along open fractures that were formed in an alteration zone that is associated with a major fault in the area. The host rock is a hard, fine-grained igneous dolerite rock, that was emplaced about 1 billion years ago, but it is believed the Blue Lace is only around 54 million years old. Another seam of Blue Lace is found about 150 m northwest of the main deposit and runs parallel to it. This deposit consists of about six separate narrow veins, and it was mined by shallow surface workings. It is called Ellensbury for marketing purposes. Large specimen pieces are seldom found in this second deposit. The seam is a darker blue with not very visible layering. 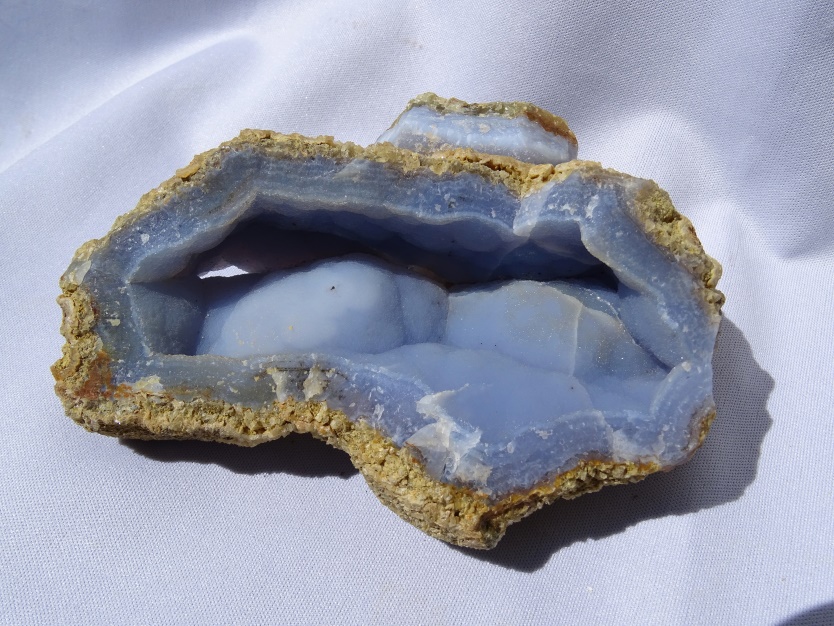 In the same area at surface level to the south of the main Blue Lace deposit is a far more “mixed-up stone”, locally called Crazy Lace. It is very pretty but not commercially viable due to the vugs and holes that can occur in it. Perhaps its composition holds further clues to this unusual deposit. For the hobbyist lapidary who only requires small quantities, Crazy Lace can make very beautiful objects as it is very hard and polishes up well. 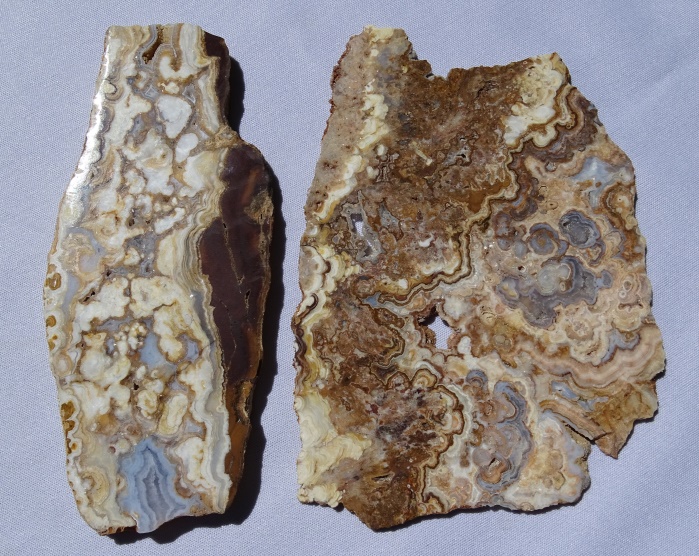 The colour of the Blue Lace agate can vary from a very pale to quite intense sky blue. However, the colour is not a pigment (such as in lapis lazuli) but caused by tiny inclusions, which result in an effect called Rayleigh scattering. (This effect is also what gives the sky its blue colour.) When I was taking photographs of the specimens, I found the best blue colour was brought out in full sunshine against a white background. 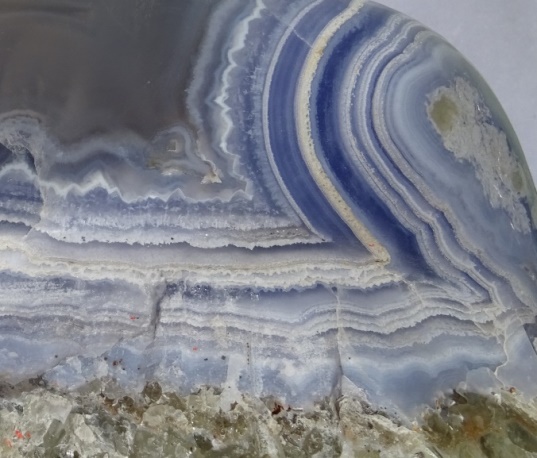 The deposit was always mined by Swanson Enterprises; firstly by the founder George, and more recently by his son Lionel. George Swanson located the source in about 1962, and from then on his company steadily removed the Blue Lace agate, initially by hand, and then by mechanised mining from 1977 onwards. The Blue Lace was partially cleaned by hand-cobbing at the mine, and then it was worked again to a more standard size once back at Swanson’s Yard in Springbok, South Africa. There it was bagged mainly for export, primarily to the East where it was made into spheres, beads, cabochons and other jewellery applications. Only about 30% of mined pieces weigh more than 1 kg, so large items made out of Blue Lace are rare. 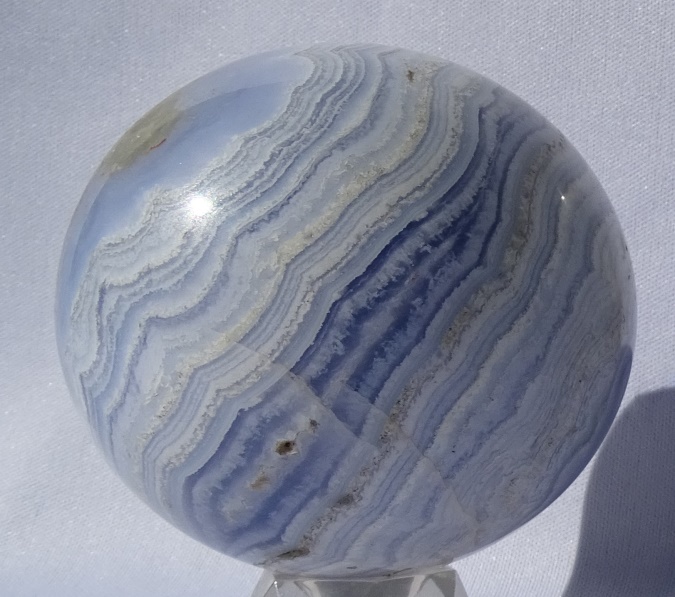 Blue Lace chalcedony gained its fame after the last landing on the moon by Apollo 17 in December 1972. Module pilot and geologist Dr Harrison Schmitt claimed to have taken the world-famous NASA photograph called “The Blue Marble” which showed a perfect, blue and white,
illuminated picture of Earth taken from the Moon. After seeing that photograph, George Swanson immediately noticed the similarity between spheres made from his Blue Lace and “The Blue Marble” photograph. His future marketing strategy was obvious, and he set off for his homeland of America with spheres and samples of the stone, where it was well received.
Blue chalcedony/agate is also mined in various parts of Africa, Australia, Brazil, Indonesia, Madagascar, Turkey, and the United States, but nothing quite compares with the Blue Lace from Ysterputs.

All photos and specimens are mine, unless otherwise specified. Further updates and newer photographs relating to all sections can be found on the Gallery page.

Acknowledgements and thanks for references, scientific information, and technicalities go to:

Should all of this have been just too blue, you are welcome to try “Life to me is like a Carousel…”
It is about my restoration of an antique Carousel Horse.  The link is below.